From MKRD.info Wiki
Jump to navigationJump to search

Engineers often pick this as their reverse battery or DC supply protection feature:

This method is picked because it is cheapest and least lossy. I will discuss more appropriate methods later.

Diode D1 does not do anything, and does not waste any power on all of those occasions that the power is applied correctly. However, if the polarity is reversed:

Then diode D1 conducts, and blows out the fuse.

That would keep the device protected. However, I came across a device recently which used a PCB trace for the fuse!

I forgot the convention that the white stripe on a power cord connects to the center conductor of a DC "barrel" style connector.

When I opened up my Cobra handheld CB radio, I have discovered that this is what they used for their protection: 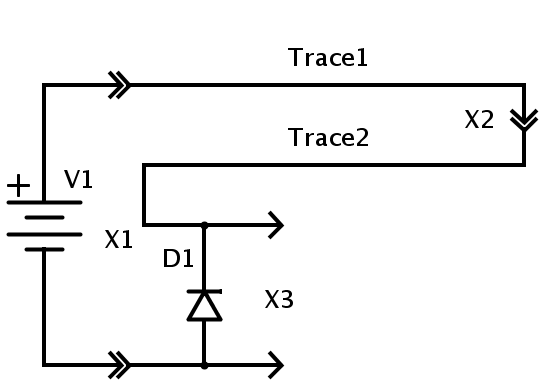 There was no fuse; additionally, the excessive current flowed across a whole board, up a connector, and back fully across a second board before finding the reverse diode! This is the mayhem that resulted: 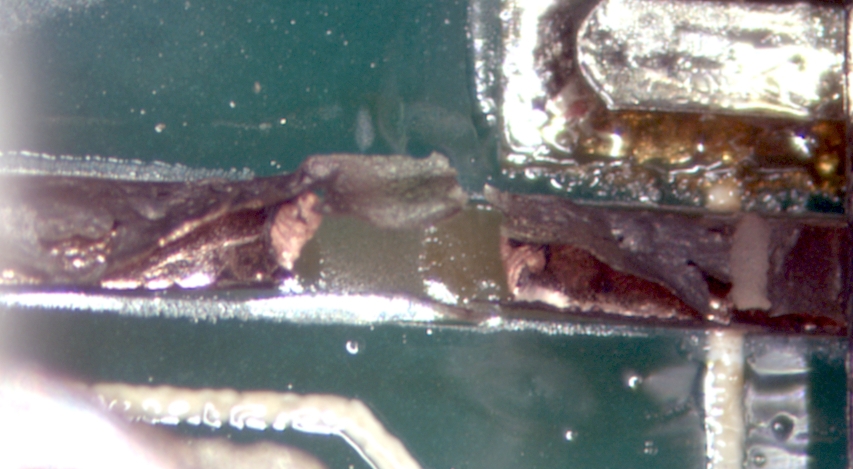 I fixed the radio by placing a jumper where the trace lifted completely off the board. I tinned another trace (since overheated copper loses its electrical properties). And I have bypassed the trace-connector-trace arrangement with a second wire jumper (white wire).

Note that I should have wired in a fuse, since I now have a thicker wire going to the diode. With this arrangement, the diode is likely to overheat before the new wire does.

How to implement a reverse-polarity protection properly

1. Use a fuse! Don't substitute a PCB trace for a fuse!

2. Use a PTC resettable fuse in place of a single-use conventional type.

4. For full operation with any polarity input, a rectifier bridge can be used. However, the voltage and power loss will be double that of a single forward-biased diode.

5. Use a FET sensing switch. Since most supplies already have a high-side P-channel FET switch for power On/Off function, this low-resistance switch can be used for polarity protection. Only the sensing circuit has to be reverse-polarity tolerant; as soon as it detects the incorrect polarity it is to disable the rest of the circuit by turning the MOSFET OFF.